From THE FIRST WAVE OF FRENCH MARISTS by Michael O'Meeghan SM, 2008, 9.

He remained at the Hokianga station till the arrival of Group II in mid 1839 when he was transferred to Kororareka. In mid-1840 he left the Marists, though for a few years retained some link with them by acting as a catechist at Whangaroa. Later he lost contact. His last years were at Reefton where he was a jobbing gardener known as Antonio Michel, alternatively "Jemmy the Gardener". He died there on 14 March, 1880, aged 68, and is buried in Reefton Cemetery as Antonio Michel.

Dismissal from the Congregation by Bishop Pompallier

But, very dear Father, I haven’t yet described the whole of the cross I have had to carry this year; it has been made much more obvious to me through the loss of Dupéron. Alas, Brother Michel,[8] a young man who is too sensitive, too affectionate, too feminine in his character, has fallen into particular friendships here which have drawn suspicions on himself even outside the house, and then, into the theft of many things from the mission, and into hypocrisy. For more than two years he was a cross for me, because I could certainly see that the subject was morally in decline. I caught him out several times, giving little presents, signs of affection, to neighbours, and, in particular, to a young married woman. After having caught him out again and reprimanded him and many, many times severely punished him, then finally having threatened to expel him if he lapsed again, I kept my word on his next fall from grace, which involved receiving from a stranger a little jar of hair cream having sent it behind my back, with a letter, to a family he liked, that is to say, to a little girl and her mother, [(Added by the writer in the margin) it was this little jar of hair cream which revealed everything] then for having haggled over a shawl in order to buy it and send it, probably to the same person. Finally, he had hidden among his possessions, some neckerchiefs, some items of hardware, pieces of material etc etc, a sort of little glory box quite suitable for a wedding celebration, and this conduct happened while misleading the poor Fathers to whom he went to confession, since he approached the sacraments in a state violating his vows and even justice as well. I dismissed him without remission, since it was the third time he had fallen in such a pitiful manner. He has gone to working at his trade as a tailor five or six leagues [25-30 km] from the mission station and so is mixing with a number of the many Europeans who are arriving every day to colonise this country. The mission has not suffered in any way by this dismissal: God’s works do not get hurt by the elimination of members who make themselves unworthy of them. May the Lord have mercy on him: that is all I desire. I think that Father Champagnat will make a real effort to get a tailor to replace him, and to repair, by his exemplary conduct, the little injury done to the body of the Brothers.

A footnote from Doc 71 gives this useful list of primary documents:

[3] Brother Michel is no longer a member of Mary’s little family. He was cast out a month or more ago, and had been deserving this for a long time, but circumstances and a glimmer of hope that the methods used would correct him persuaded His Lordship, monseigneur Pompallier, to delay doing something so painful. But being addicted to stealing is like being addicted to wine. It is hard to break the habit, especially when the stealing is done to satisfy the strongest passion, that of love. This unfortunate man loved a family to distraction, one could say. It was to give gifts to this family that he was stealing things from the mission and also to deck himself out in a manner that was hardly appropriate for a little Brother of Mary, to say no more. As soon as there were two stations in New Zealand, monseigneur lost no time in removing him from the object of his affections, but after a year, or almost a year, of separation, his feelings were as strong as ever, and the obligations of morality and religion were being no better observed. Could the Holy Virgin endure conduct like this in her family? This good Mother knows what lies behind the vile and only too well-founded suspicions that have been voiced publicly about this unfortunate man in relation to moral behaviour. What is quite certain is that his particular affection was for the wife of this dear family.

When the NZ Marist Province developed a residential zone called "Pompallier Estate" next to Pompallier Catholic College in Whangarei they named streets after the Poynton Family, Fr Catherin Servant and Br Michel Colombon. 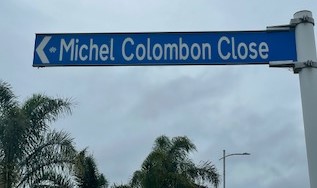