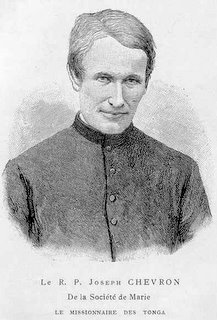 In just a week of his arrival, on 17 December, Pompallier despatched him (with Br Attale) to Futuna. With the haphazard shipping available the journey took them five months instead of the expected three weeks. They landed on Futuna on 16 May 1840. In November they crossed to Wallis where the mission was making better progress and needed help. When Pompallier was returning from Wallis to the Bay of Islands in mid-1842 he took Chevron and Attale with him to leave them at Pea on Tongatapu on 2 July. Chevron spent the rest of his life there, 42 years, dying on 6 October 1884, aged 76.